Meet Orylan – The Model Ben Shapiro is After! 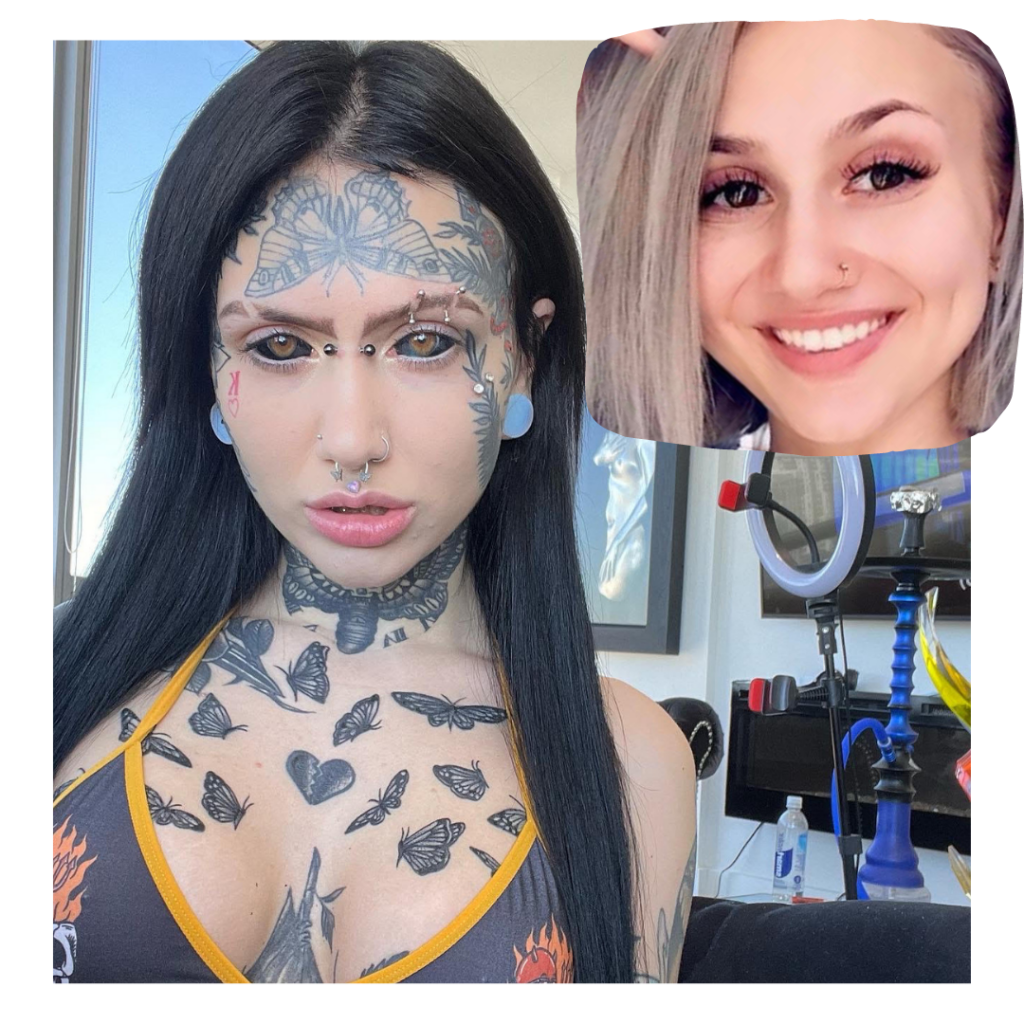 You may recognize Orylan due to the fact that she has a one of a kind look and a very memorable face. The heavily tattooed model from Houston is most known for having her eyeballs tattooed, which may make you squirm, knowing she had needles literally inside her eyes, but once you see the finished look it's actually pretty awesome. 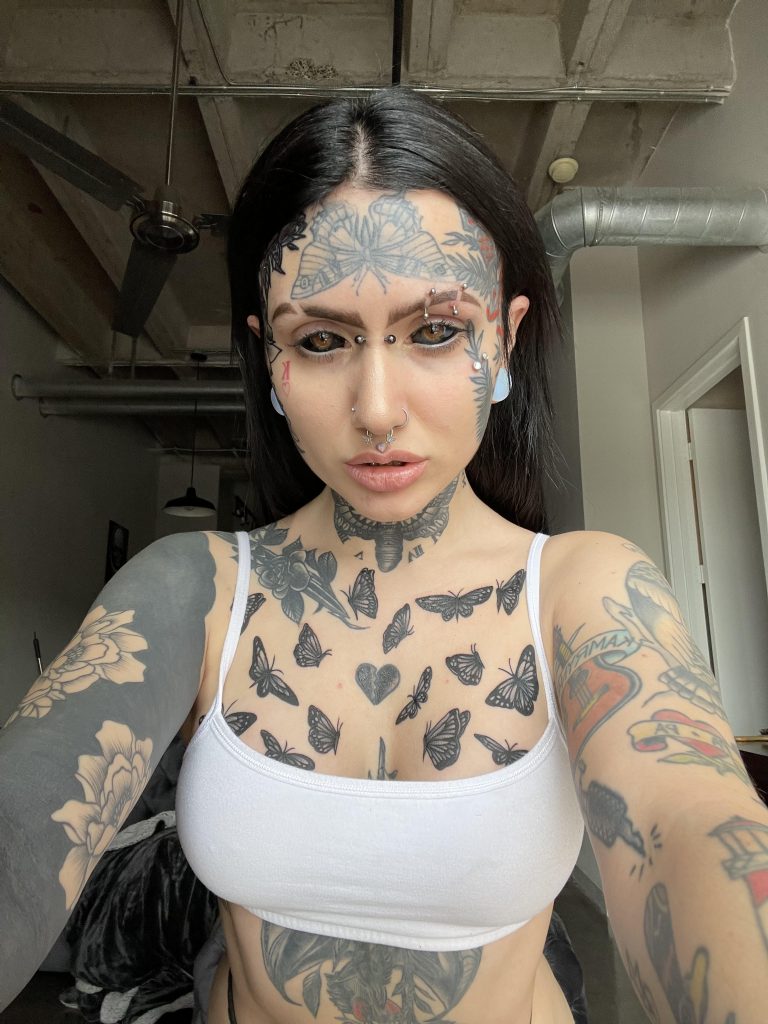 Orylan has been going viral on the gram for a while now and has been gaining new fans daily, which is probably because despite looking like a she might bite your head off, Orylan is actually a really sweet girl. It's like just when you get sucked in by her unique look, she keeps you hostage with her charming wit and super cute accent.

"I’m actually not a demon or a satan worshipper despite what most people think about me." 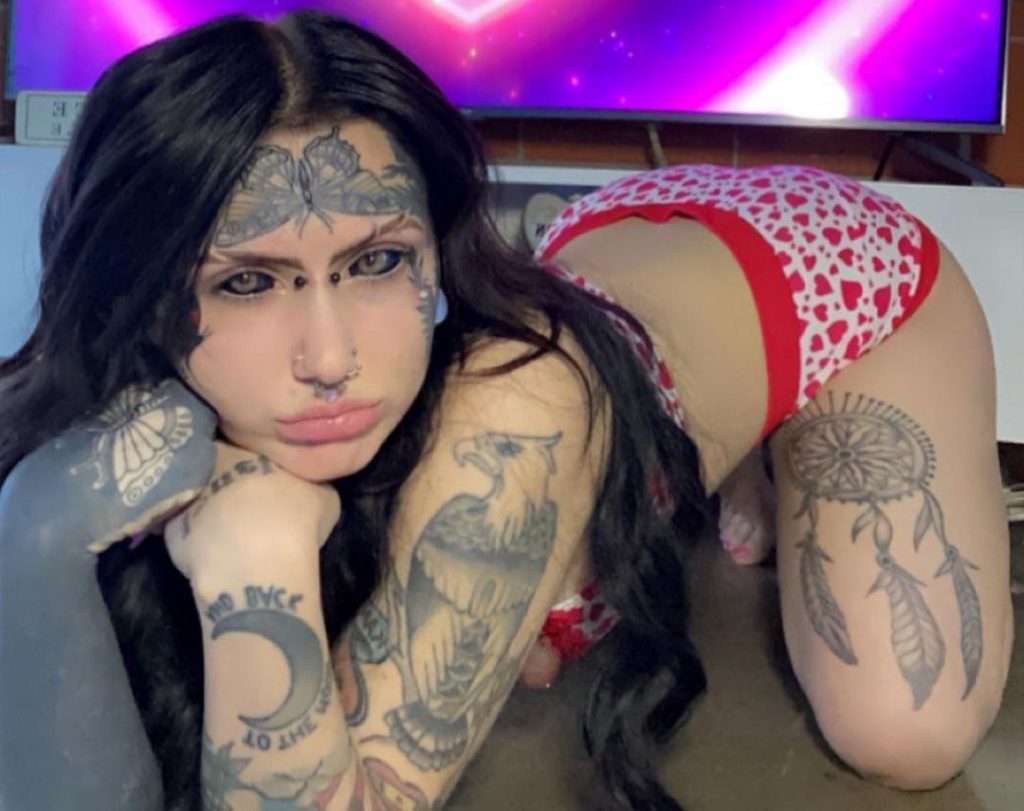 You can learn a lot more about her over on her YouTube channel where she proves that you should never judge a book from its cover, you won't find her practising magic or doing blood sacrifices, but rather giving her two hairless cats a bath while they have little shower caps on their heads. 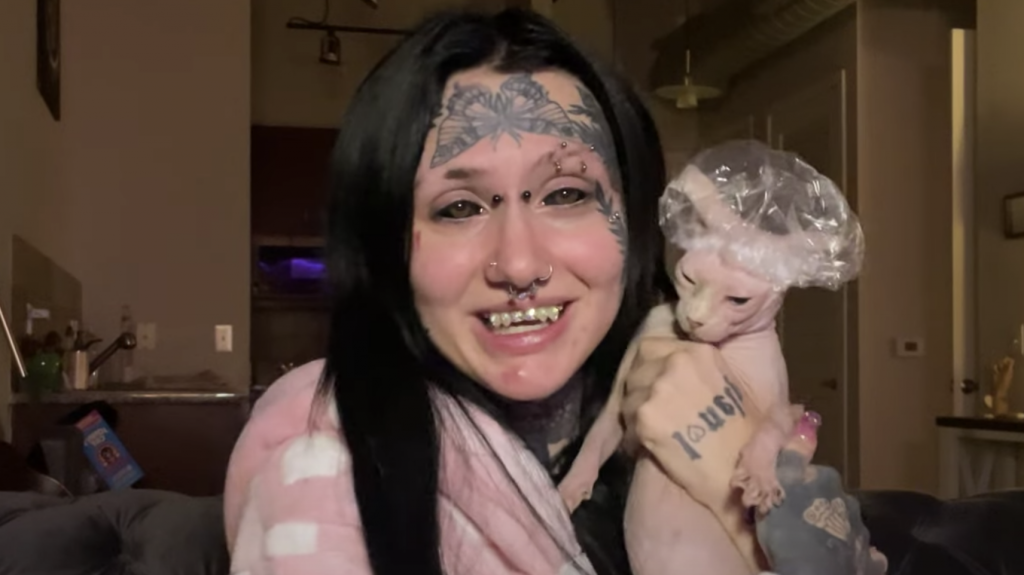 The model also has a massive following on her OnlyFans page, a space that has given her financial freedom, allowing her to pursue her interests, like tattooing and starting her own shop.

"The next goal in my career I’m working towards is just stepping up making more great content, investing more in myself and opening possible businesses, possibly a tattoo shop in the future which I’m currently practicing myself"

This week, Orylan is going viral on Instagram after Ben Shapiro made comment about her before and after photos, saying that her body modification choices are the effect of "liberalism" and listening to the late rapper Lil Peep... which seems a little out of touch considering Orylan also has zero interest in politics and doesn't even identify as a liberal, so this would actually be a great opportunity for Ben to have Orylan on his show! Who's hooking it up?

Orylan actually addressed the hate thats been going around in a recent YouTube video and we were also lucky enough to do a quick Q+A with the model, finding out a little bit more about the black eyed beauty that's got Ben Shapiro all hot and bothered!

She has been accused of being a demon, a devil worshipper and a drug user, all of which are untrue. You'll come to find out that Orylan actually doesn't do any drugs, and has been a practising Christian her entire life. Something I'm sure the Ben Shaprio gang did not expect to hear.

Read our Q+A with Orylan below and keep scrolling for a new interview she recently did with the well known Soft White Underbelly YouTube channel to find out even more about your new crush!

How has your career/life changed since starting your OnlyFans?

My Life/Career has changed so much since starting OnlyFans, I say this because it was a huge turning point to financial freedom when almost 2 years ago I was a nanny barley making 300$ a week to now making drastically enough to be able to afford a nice apartment and I just bought my own car as well, it helped with my confidence and being able to more so transform myself.

What is the next goal you're working towards in your career?

The next goal in my career I’m working towards is just stepping up making more great content, investing more in myself and opening possible businesses, possibly a tattoo shop in the future which I’m currently practicing myself as I want to tattoo as a side hustle but eventually own my own studio.

I just started my own YouTube channel, it’s slowly growing but I know I have a lot to say and want to portray that and my life in videos, it helps me express myself more and people learn more about me and not just what they see on the outside. My favorite YouTuber right now is SoftWhiteUnderbelly, I’m actually featured on his YouTube channel, I’ll link the video below.

If you were stuck on an island, and you can only listen to one album, which one is it?

If I’m stuck on an island and can only pic one singer or album to listen to would be Lil Peep, I wouldn’t be able to chose any album, I love all his music.

Who are your style icons?

My style icons right now would be, Morticia Adams from Adam’s family but more modern I would say, I dream to own a home like she had in the movies and tv show

Is there any tattoo you would have done differently?

Who would you rather have drink your blood - Billy Bob Thorton or Machine Gun Kelly?

If I had to chose between Billy Bob Thornton or MGK to drink my blood it would be Billy Bob Thornton fotsure because him and Angelina Jolie had viles of each other’s blood around their necks plus he’s an icon, I loved him in Bad Santa😎

People have judged you for your body modifications and called you a "demon" (rude) - What colour do you think your aura really is?

I don’t know much about auras but if i had to chose it would be all the butterfly colors because that’s what I am.

What other content creators on OnlyFans/IG are you following right now?

I don’t tend to follow current or popular creators online, I chose to focus on the real world things, if my sphynx cats had an Instagram I’d follow them all day:)

What is your go-to karaoke song?

Go to karaoke song is unidentified because I’ve never had the chance to do it because no man has ever wowed me on a date lol but I love Lady Gaga and sing her songs in the shower if that counts.

What is your favorite tattoo so far?

My favorite tattoo is my butterfly middle piece on my head. It’s the most bold and meaningful piece.

I don’t keep many secrets I tend to be an open book but I guess I’d have to say most people don’t know I’m actually not a demon or a satan worshipper despite what most people think about me.

See more of Orylan on her:

and of course over on her ONLYFANS!

Joey King Winning Our Hearts at the MTV Awards!