Rebecca Lobie Has the Weirdest Tattoo!

The late Steve Irwin, Crocadile Hunter had a niece before he died, her name is Rebecca Lobie and she’s been pretty active with posting bikini selfies on social media lately. We don’t know a lot about her but her mother is Steve’s sister and after he died his wife banned Rebecca’s family from the zoo. Besides that all we know is she’s a fan of tattoos and has what is probably the weirdest booty tattoo I’ve ever seen!

The tattoo is a portrait of a horse with the word PHOTOCOPY written under it in a cursive script. Dude, what? 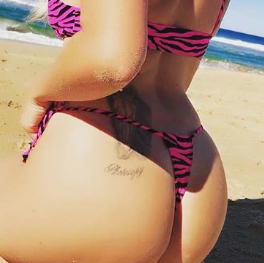 Olivia Munn Working on Her Angles!

Lisa Rinna Gets Into Beauty!