Halsey is Her Own Thinspiration!

Halsey is apologizing to her fans today after posting a photo that showcases her battle with an eating disorder to her Instagram last night. The singer was taking part in a new trend that has been going around the platform. Fans ask to see certain photos and celebrities reply by posting the requested images in Instagram Stories.

When a fan asked Halsey to share a photo of herself at her "lowest point", the 26 year old took it literally and posted a photo of herself in a pair of white panties looking like she's at her lowest point on the scale. The singer captioned the photo with "TW: ED - ask for help" which means, Trigger Warning, Eating Disorder. 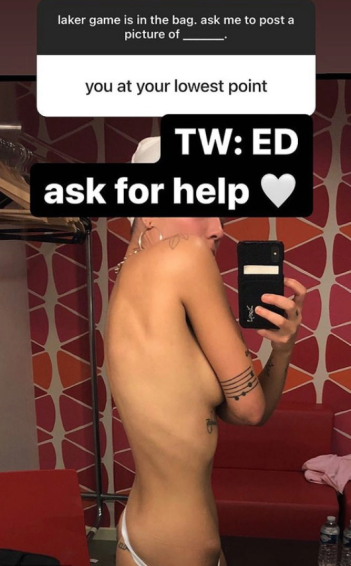 Apparently the "TW" was not good enough and Halsey has been forced to apologize on twitter for oversharing on the gram.

“I am very sorry for posting a photo of myself depicting my struggle with ED without a sufficient trigger warning. I was very nervous to post it and didn’t think properly. I had positive intentions. I would never want to harm someone who shares my struggle.”

Halsey left it at that and said that she is not capable of continuing the conversation at this time, even though she's the one who brought it up in the first place. Plus, she did include a trigger warning so the whole thing is sort of its own paradox of PC weirdness.

“with that being said im gonna log off now because this has turned into something I am not emotionally equipped to handle for the time being. I hope that’s okay.”

See more highlights from Halsey's "post a photo of" trend in the gallery below!

Selena Gomez in the Kitchen!