There Is A God. Kim Kardashian Caught Saying “Retarded” On Video 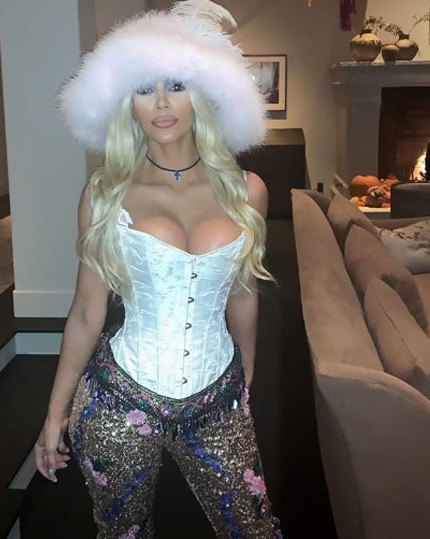 For as much as we here on the Dark Web know that Kim Kardashian is the off-brand Mexican Gak-injected Antichrist, most of the population, believe it or not, views her as pretty much infallible. A carefully-curated career turnaround that took her from being viewed mostly as Ray J's cum dumpster to being viewed as a multi-tasking career woman, doting wife to a bipolar gay rapper, and loving mother has been a success. She's even been able to spin Kanye West's MAGA meltdown as an activist wakeup call. Remember, she got that crackhead and future burden to society out of jail. Everything's going as planned for Kim Kardashian. She'd have to be retarded to mess things up.

Speaking. Of. Our fallen Armenian angel got a little too tipsy at a Halloween party last night, and when displeased with others' inability to guess her dumpy Ariel Winter knockoff Pamela Anderson Halloween costume, she used to word "retarded" in drunk frustration. What's even better is that she posted a video of the encounter to her Instagram Story. There is a Dark Web God. Kim quickly deleted the video, but not before it dispersed - like a retarded dandelion in the wind - to every corner of the Internet. In the timeless words of Sophia from Golden Girls - "Sluts just heal quicker." And most likely Kim, the biggest slut of them all, will overcome yet another public fallout. But until then, enjoy.

why is it still acceptable that @KimKardashian uses this kind of disrespectful rhetoric in 2018? Really? “retarded” pic.twitter.com/K10BQvBAlK

The Shaun White is strong with this one, and she's already released an apology:

I want to apologize for what I said in a recent video post that is inappropriate and insensitive to the special needs community. I try to learn from my mistakes and this is one of those times. Please know that my intention is always pure, and in this case, it was a mistake. I’m sorry.