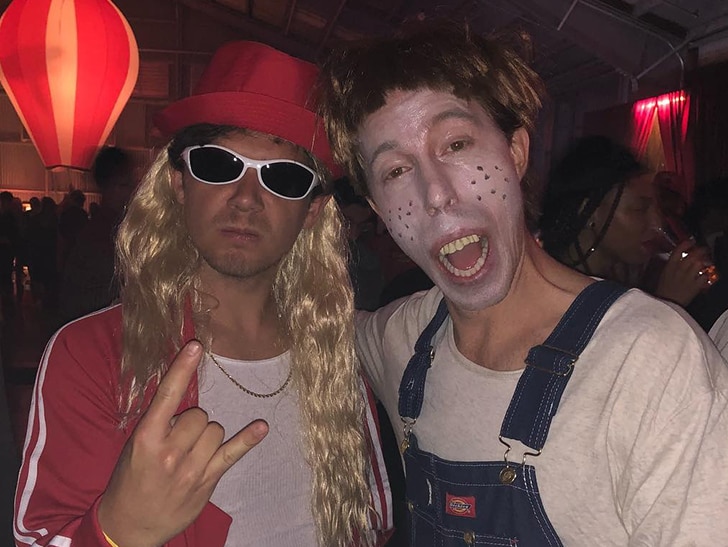 Shaun White is everything that sucks about Gen-Xers packaged as the thirty-two-year-old Millennial that he is, which makes him a perfect candidate for Death Row. Gen-Xers grew up in a simpler time, when you could talk like a butt baby between a Ninja Turtle and Bart Simpson, yet still call others "retarded" in order to impress your equally radical and tubular friends. Gnarly. No one understands us. Let's meet at the Peach Pit. But don't invite the retard. He's bogus. Or what the fuck ever happened back then.

White - whose shittiness we discussed at length after he cried over his own radicalness following his win at a fake sport during the PyeonChang Winter Olympics - dressed up for Halloween as Ben Stiller's character's character Simple Jack from Tropic Thunder. In Tropic Thunder, Ben Stiller played a washed-up actor whose downfall was aided by his publically derided role as a man with mental disabilities. According to The Guardian:

The character Stiller plays is a fading film-star who has himself just portrayed a gibbering, goofy dimwit in a film called Simple Jack. According to a colleague, this has ruined his career. His mistake was to go 'full-retard.' To win an Oscar you should only go 'part-retard,' like Dustin Hoffman in Rain Man or Tom Hanks in Forrest Gump.

Despite the backlash Tropic Thunder faced following its release, Ben Stiller's character Simple Jack actually cleverly underlined Hollywood's hypocrisy in exploiting people with mental disabilities while pretending to elevate them. The fact that the general public was too blinded by the film's use of the word "retard" to decipher a message is, well, right on par with the general public.

All of this brings us to our snowbound Bart Simpson, Shaun White. He dressed up as Simple Jack without understanding that the only reason the character could have existed in a mainstream Hollywood movie is if there was some sort of deeper commentary than "retards are funny." (You can tell by my defending of Tropic Thunder that I really fucking hate Shaun White.) Representatives for the Special Olympics, as well as anyone with eyes, came for White, causing him to take down his picture and issue the apology:

I owe everyone in the Special Olympics community an apology for my poor choice of Halloween costume the other night. It was a last minute decision. It was the wrong one.

The Special Olympics were right to call me out on it. They do great work supporting so many tremendous athletes and I am sorry for being insensitive. Lesson learned.

With all this said, if you're going to be so bold as to go as Simple Jack for Halloween and make THAT face in that pic, you better fucking stand by your decision. Maybe Shaun should have gone as a little bitch.

Florence Pugh has a Greenthumb!