Miley Cyrus is Breaking The Internet!

Miley Cyrus recently got in on the whole TikTok popularity game and has been sharing fun videos to the platform with her fans. We recently saw her tease at a new song while actually making out with another TikTok star in the video.

The song is finally being released and is a remix of The Kid Laroi song Without You. The original song was huge on TikTok and has catapulted Kid Laroi into megastardom, it also got him a $4.9M record deal with Sony.

Miley and Kid Laroi (who is literally a kid at 17 years old) got together to film a music video for the hit song where they look like two teens loitering outside of a McDonald's, bringing back the nostalgic feeling of young love.

Kinda creepy when you remember that Miley is actually 28 years old and not a fellow teen, but I don't think anyone cares! In other news, Miley is back on the weed, after making it known to the world that she had quit pot, she can be seen smoking on a joint in the video!

Miley directed the music video herself and gave us a look at the behind the scenes of the shoot, as seen in the video above. Watch the new video below and catch some highlights in the gallery ! 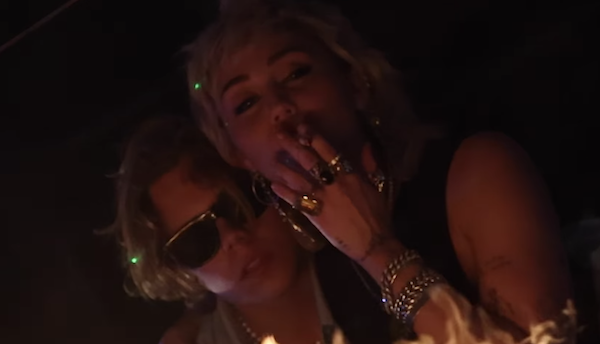