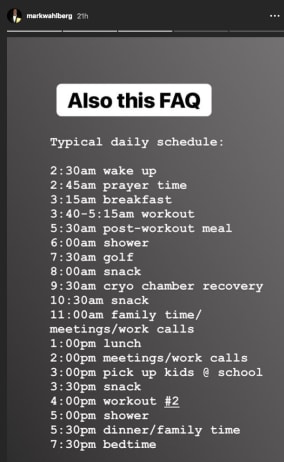 People are hailing Mark Wahlberg's viral daily schedule posted to his Instagram Story as a testament to rigorous self-discipline. Inspiring. Aspirational. But Jeffrey Dahmer was also a stickler for time management. What we have is proof that Mark Wahlberg has gone off the deep end, and while he might not be an immediate threat to himself or others, his sanity has left the building. If it ever arrived.

Mark Wahlberg is a known devout Catholic. There, I said it. It's not a dis. Just a fact. This doesn't necessarily mean that he sexually assaults little boys, but it does mean that he has severe internalized shame. Probably for sexually assaulting little boys. Stir this in with Hollywood fame and millions of dollars, and there isn't much tethering Wahlberg to reality. He wakes up at 2:30 am. By 9:30 am he's already prayed, eaten three times, and earned himself some time in the cryo chamber. And by 7:30 pm he's in bed. This is not normal. Or inspiring. Or aspirational. It's scary. The question that should really be on everyone's mind after seeing this routine is - when does Mark Wahlberg poop. And also - is he a serial killer.

Had to recover these last two days and now ready to hit it hard once again. #recovertoperformbetter @performinspired @drchristophervincent

Vanessa Hudgens Opts for a One Piece