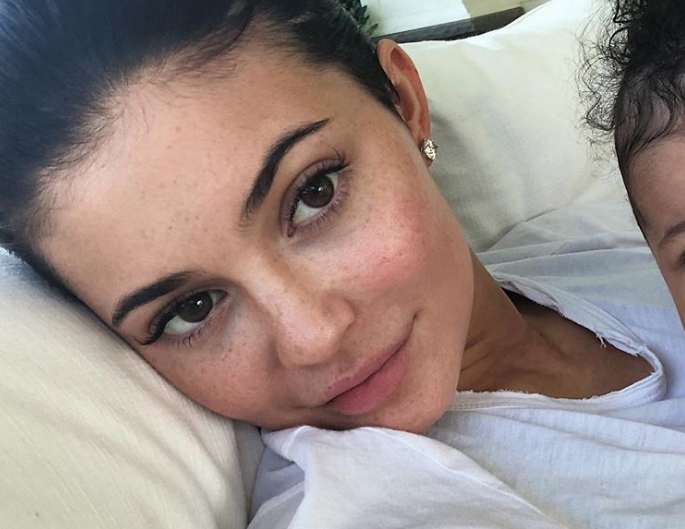 Fans of Kylie Jenner seriously need to check themselves and collect themselves. Apparently - and I'm still piecing together this brain teaser - they've been looking at and commenting on the pictures she's been posting of her daughter Stormi on Instagram - a social media platform used for sharing and commenting on pictures. These people have obviously gone too far. Jenner - who last year was mounted by Kris Jenner with a turkey baster in the middle of the night to produce a healthy beautiful little precious Keeping Up With The Prostitutes plot line - has deleted all Instagram pictures that included Stormi's face. And when drilled about the decision, indignantly stated:

I'm not sharing photos of my girl right now.

Upon her daughters unholy arrival, Jenner immediately released a makeup line branded around the name "Stormi." As I previously stated, knowing that millions of dollars hinged on the packaging and concept of the line, Jenner very well could have consulted with a marketing team before choosing her daughter's name. This is just speculation, but, it's also right. Jenner's baby name announcement became the most favorited Instagram post of all time, with the first picture of Stormi becoming the second most favorited. The Jenndashians play social media like a fiddle, and this latest effort of demanding privacy for her and her baby (who has already been seen by a large chunk of the world's population) is just another way for Kylie to get consumers to turn another page in the Jenndashian's saga - The Box Children. Box like, vagina. Cute.

Most likely Jenner will wait for buzz surrounding her latest bold parenting decision to die down before returning to great fanfare with a picture of Stormi's face. Some are speculating the Jenner took down Stormi's pics because she looks more like Jenner's bodyguard than supposed baby daddy Travis Scott. But even that carefully orchestrated rumor of bodyguard banging has died down. Time for the next chapter. And if this one means we see one less Jenndashian face in the world, I can live with that.

Kira Kosarin Rollerskating Her Way to Our Hearts!