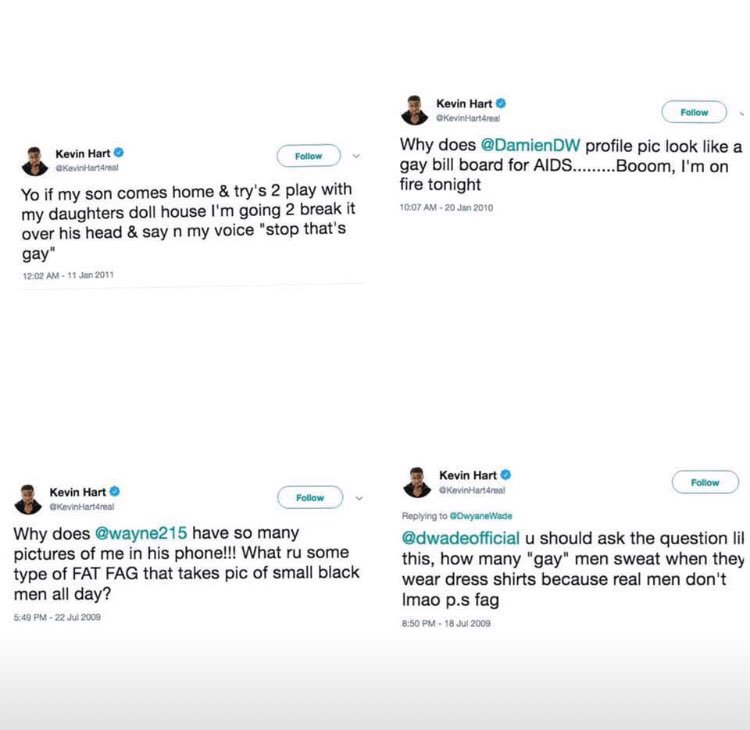 Kevin Hart is one of the billion celebs to fall victim to the resurfacing of bigotted old tweets that he was too stupid to take down after hitting mainstream stardom. But unlike some celebs whose previous use of homophobic, racist, or just problematic af terms feels like an uneducated 2000's lapse in judgment (find one person who didn't use the word "retarded" in 2001) and blown out of proportion by the woke af 2018 Internet, Hart genuinely seems to hate gay people. I don't agree agree with Hart, but you have to respect a man for knowing what he likes. Or hates. And in Hart's case, that's homosexuals.

Amid pressure from woke af-ers, Hart has stepped down from his upcoming Oscars hosting duties. Oh the hilarity we'll miss out on. Before officially pulling out from the Oscars, Hart released this defensive Instagram video and caption:

Stop looking for reasons to be negative...Stop searching for reasons to be angry....I swear I wish you guys could see/feel/understand the mental place that I am in. I am truly happy people....there is nothing that you can do to change that...NOTHING. I work hard on a daily basis to spread positivity to all....with that being said. If u want to search my history or past and anger yourselves with what u find that is fine with me. I’m almost 40 years old and I’m in love with the man that I am becoming. You LIVE and YOU LEARN & YOU GROW & YOU MATURE. I live to Love....Please take your negative energy and put it into something constructive. Please....What’s understood should never have to be said. I LOVE EVERYBODY.....ONCE AGAIN EVERYBODY. If you choose to not believe me then that’s on you....Have a beautiful day

Have a beautiful day faggot. But now we have an official statement lovingly crafted by his publicist below. His ass was fired. I mean he sTePpEd DoWn. You guys are going to say that Hart's previous tweets, some of which you can check out in the image at the top of the page, are being blown out of proportion. And if they were fired off during or before my arbitrary bigot threshold year 0f 2007, then I wouldn't give a shit. But the tweets extend into 2011. The bigot danger zone.

Hart has previously apologized for his homophobic schtick. But unpopular opinion - people don't change. Especially when they're coerced into it. And if he didn't hate gays already, he sure does now that they cost him his Oscar hosting gig. Just let Kevin Hart hate gay people in peace. Also I kind of want to dock a black person points for being homophobic. Feels like they should be on the same side. Do you hate gay people as much as Kevin Hart? Let yourself be heard in the comments.

I have made the choice to step down from hosting this year's Oscar's....this is because I do not want to be a distraction on a night that should be celebrated by so many amazing talented artists. I sincerely apologize to the LGBTQ community for my insensitive words from my past.

I'm sorry that I hurt people.. I am evolving and want to continue to do so. My goal is to bring people together not tear us apart. Much love & appreciation to the Academy. I hope we can meet again.

Julianne Hough Back on the Bike!