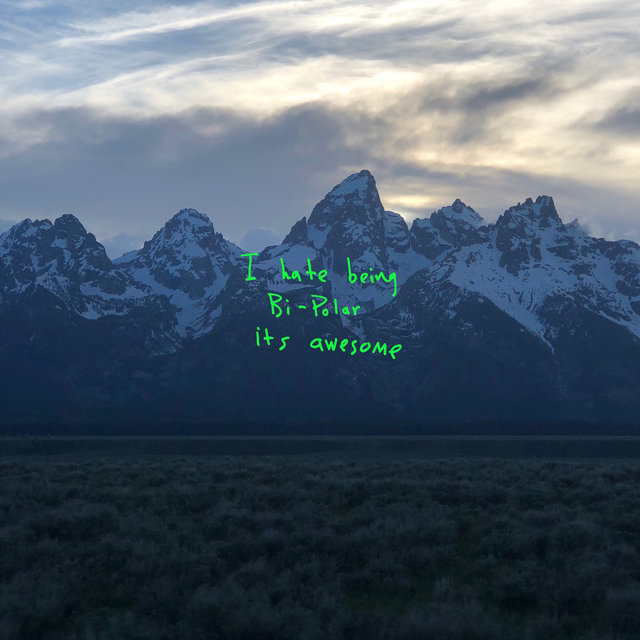 The most elaborate media blitz (planned or unplanned) for an album since Lady Gaga donned a flying dress for Art Pop has finally cumulated in the release of Kanye West's Ye. The seven tracks equate to a whopping twenty-three-minutes of auto-tuned musings on being a self-admittedly bi-polar rapper with a porn star wife and having too much money and zero fingers on the pulse of reality. I listened to Ye on Spotify for as long as I could before writing this, and I can safely say that it's relatively indistinguishable from his earlier albums. Except his arrogance and forcefield of ass kissers have lulled Kanye into thinking that his songs need not be confined to memorable beats or interesting lyrics. Kayne presumably feels the weight of his words renders musical conventions meaningless. Maybe you'll feel the same way when listening to it. After all, he does talk about wanting to kill who I assume to be Kim Kardashian for the entirety of the first song "I Thought About Killing You." Willing to give some leeway there.

This holier-than-thou attitude played out in the actual introduction of his album - for which Kanye flew out celebs and writers to Wyoming to listen to Ye for the first time in the same state that he recorded it. You can read an account of the bizarre event from Pitchfork.

Kanye West confirms his bipolar disorder with the album's lyrics as well as the somewhat didactic text on the cover: "I hate being Bi-Polar its awesome." It's become a source of pride for Kanye, and while bipolar disorder has contributed to the musical genius of artists like Daniel Johnston, it also contributed to Amanda Bynes' wig decisions. Not necessarily an outright signal of genius.

And for those of you wondering if Kanye cements his Trump allegiance with a Trump mention in his art - he does not. A month of garnering favs, retweets, and headlines for his Make American Great Again push - including a live meltdown on TMZ - could have potentially had less to do with politics and more to do with album sales. (Or shirt sales. His Wyoming listening party long-sleeve t-shirt is available for $145 at shop.kanyewest.com.) I'm personally not buying any of it, but give Ye a listen (available on iTunes, Spotify, and Tidal) for yourself and let us know if Kanye's Making Music Great Again.