Grimes – Elon Musk Only Union Busts A Nut For Me

In case you've taken your eyeballs off your computer screen for five seconds, alt indie songstress and part-time Rooney Mara impersonator Grimes is banging Elon Musk, and recently she flexed her knowledge of labor relations by debunking the news that the Tesla founder is a union buster. Musk must have a magic dick, or, just maybe, women get wet for money, because Musk, who frankly looks like Chaz Bono, is fresh off Amber Heard's puss and onto Grimes'. His latest piece is dedicated to standing by her man in the face of all of his adversity, and took to Twitter (in a since-deleted tweet) with: 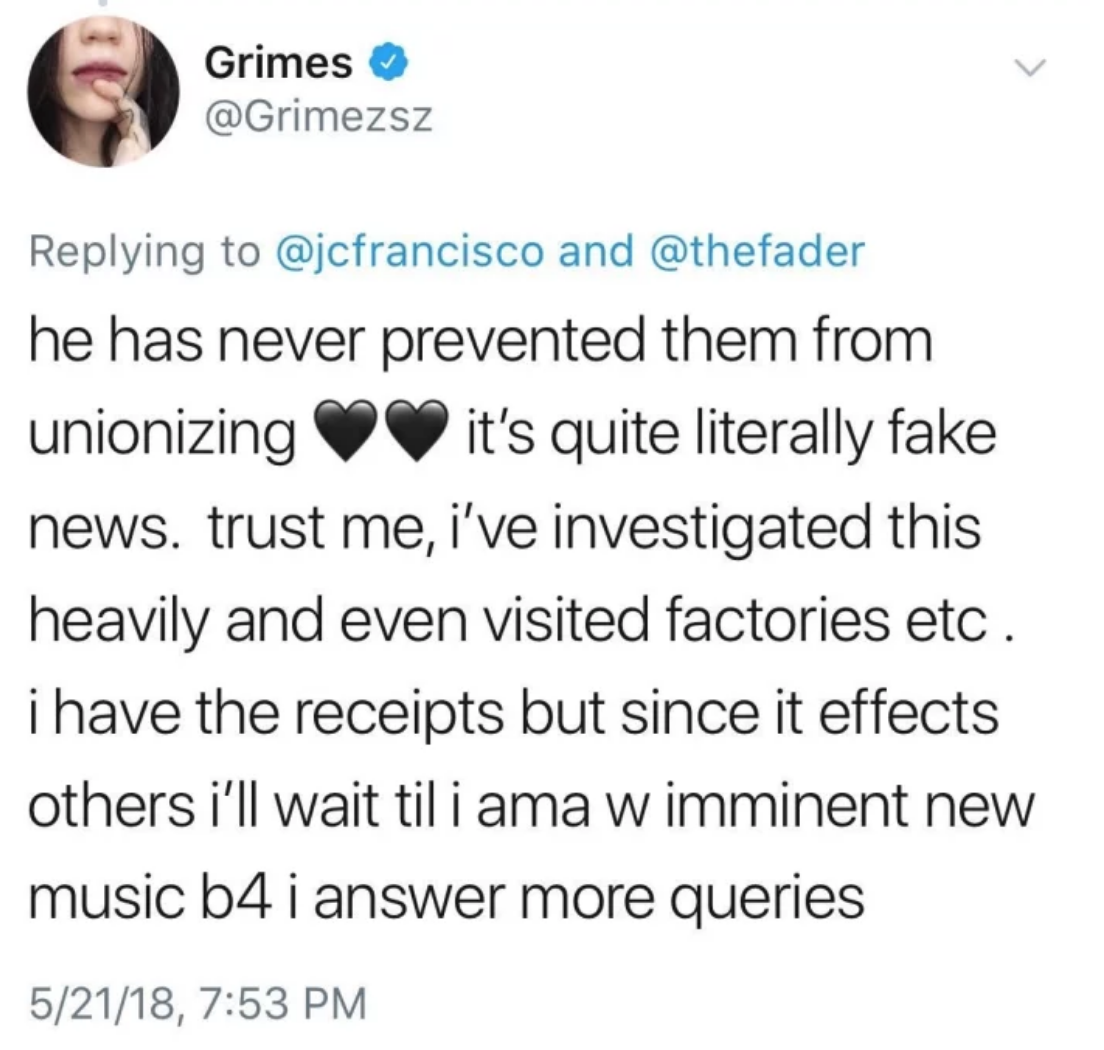 Even though Grimes deleted the tweet, she defended both Musk and deleting her tweet with more tweets:

@cocteau_twinks @jcfrancisco @thefader hm.. deleting my tweets abt this shit bc this is way too nuanced of a convo to have over twitter. again, down to hash out in ama later, down to hear opinions. in any case love and respect to all. plz try to see me as a human being an not just an extension of another person.

@cocteau_twinks @jcfrancisco @thefader that said i respect yalls commitment to social justice. we all gotta work to make the world better,, i’ll stay on my game too.don’t wanna answer more questions cuz who i’m dating is irrelevant to my music lol, speaking of gotta get back 2 work.

Maybe she should stop tweeting. Last month workers at Musk's Tesla factory in Fremont, CA accused him of endorsing union-busting tactics "through harassment and surveillance." Employees were also "required... to sign a confidentiality agreement which prohibited them from discussing the details of their working conditions." Folks at the National Labor Relations Board have taken the matter into their own hands, and will be bring the claims to court in June. As you probably know, Tesla is way behind on manufacturing pre-ordered cars designed specifically for douchebags, and according to Salon, employees received threatening emails insinuating that they're not working hard enough to fill orders.

The world is watching us very closely, to understand one thing: How many Model 3's can Tesla build in a week? This is a critical moment in Tesla's history, and there are a number of reasons it's so important. You should pick the one that hits you in the gut and makes you want to win.

We'll know more about the outcome of union-busting allegations after the case goes to court on June 11th. Until then we can glean all of our insight into this multifaceted and hot-button issue from the Hot Topics cashier of singers.

Bikini Time and Other Fine Things!

Guess the Princess Leia and Other Fine Things!