As a piece of piping hot white Appalachian trash, I have been to the original Corbin, KY location of fast food chain KFC numerous times, and judging by the abundance of rebel flags and blown out trailers scattering the area, context clues tell me the original Col. Sanders must have been pretty darn progressive. I kid. The original Harland Sanders was a "racist womanizer" and " a major contributor to Alabama segregationist George C. Wallace's 1968 bid for the presidency." Those Mandingo fights are finger-lickin' fun! While Sanders' likeness has been resurrected by multiple male actors such as Darrell Hammond, Norm Macdonald, and hypothetical male Rob Lowe for various ad campaigns, his most recent reincarnation is portrayed by none other than Reba McEntire. This is the first time that a woman has played the fast food maverick, and the Internet gives a bunch of shits because this is 2018 and these things matter.

The whole thing is basically Reba hiking up her fringe denim skirt and dropping a steaming load on Sanders' grave. But this is the same case for any actor who portrays a post-mortem human without his consent, so do we really give a shit? Oh yeah that's right it's 2018 and we definitely do. Here's what McEntire has to say about the buttered roll of a lifetime:

And here's what whoever the hell is running this circus has to say about casting Reba:

We picked Reba McEntire because she is a perfect fit for KFC and Smoky Mountain BBQ. She embodies the qualities of the colonel with her showmanship and entrepreneurial spirit. We love to find people who are really iconic, like Rob Lowe is very iconic. Also, someone who really represents our product. She is definitely sweet. She has that Southern charm.

"Southern charm?" McEntire is from Oklahoma. Do they even have trailer parks and meth labs in Oklahoma? As a true Southerner I'm not offended that The Colonel is portrayed by a woman - after all it puts her in the kitchen - I'm offended that they're somehow roping in some bougie state like Oklahoma into my beloved home. You know the real reason "Strangers ain't come down from Rocky Top?" We shot them. Wow didn't expect this to end with that tone. Guess I'm just not a fan of a little something called cultural appropriation. Behold our blackface: 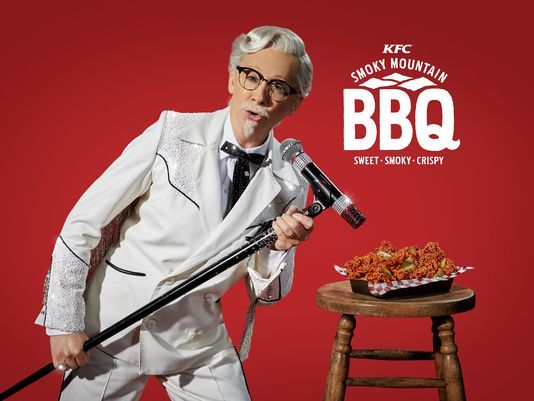